When was the last time something was this polarizing for Ford? Oh that’s right, when they originally announced the Mach-E as the Mach 1.

In 2017, at the North American International Auto Show, Ford CEO Mark Fields dropped the teaser for a new Ford vehicle. This teaser showed a Mustang and Explorer entering a garage followed by a surge of electricity. At the end, an electrified Mach 1 logo flashed on the screen. People lost their cool, fans were enraged. The public outcry and various petitions displayed that Ford should not mess with the Mustang and the Mach 1 name plates.

Following the Mach 1 name fiasco, Ford changed the name of their new vehicle from Mach 1 to Mach-E. Fans rejoiced, everyone was happy that Ford took notice to not screw with over 50 years of heritage. Through leaks, it was found out that even though the vehicle would not carry the Mustang Mach 1 name anymore, it would still be “Mustang inspired”. Everyone was perfectly okay with this because it was simply “inspired”, not a full-fledged pony. About a week before Ford’s launch event for the Mach-E, the new vehicle’s logo started to appear online. That is when stuff started to hit the fan, again. No longer was the Mach-E inspired by the Mustang, it became one.

One of the worst aspects of calling the Mach-E a Mustang is simply what it is called. What are we supposed to call the two door 2+2 Mustang now? It is extremely confusing to consumers, as there is no true unique identifier for the two door 2+2 anymore as Mustang now applies to two completely different models. I have seen consumers who are not up to speed on the Mustang, confused asking when the Mustang became a SUV. Then there is the added confusion by using the same trim packages. Mustang GT technically could mean the Mach-E GT or the two door 2+2 GT. This naming nightmare could have been solved by simply not calling it a Mustang. Which would not have been hard since it was not developed as a Mustang.

The Mach-E Was Not Developed As A Mustang

Something that really bugs me about Ford’s flip flop approach to the Mach-E is that it severely hindered the vehicle from truly embracing being a Mustang during the development process. Ford started off with this very pinpoint vision of creating a new Mach 1 Mustang for the current market through use of electrification. After the backlash they backed off to something that was just “Mustang inspired”.

The problem with this is that the Mach-E spent most of its development as not a Mustang and it really shows. If the Mach-E was destined to wear the Mustang badge all along it would have been very apparent. If you took a group of uninformed consumers and showed them a debadged Mach-E then asked them what brand this vehicle is. Most are not going to immediately exclaim, Mustang.

The Mach-E lacks true Mustang styling. The “Mustang hips” look pretty much identical to the Model Y. The Mach-E forgos real tri-bar tail lights for another “Mustang” inspired design element that doesn’t exactly say Mustang. A pony on the steering wheel is the only design element in the interior that lets you know it is a Mustang. No trace of a sporty Mustang interior such as the double brow dashboard, gauges or user interface. No one is wowing their Mustang friends when they talk about the Mach-E’s drive modes. Which are called Whisper, Engaged and Unbridled. You know what sounds more Mustang? Quiet, Sport and Track, the same mode names used on the current Mustang.

Ford could have created a very true to the brand Mustang car but instead created something that looks like a Mustang after a few too many drinks on the outside, and nothing like one on the inside. This lack of Mustang DNA ultimately fails to invoke the feeling of Mustang. I think this is what really puts off fans as it truly has no sensory relation to the Mustang.

The most iconic sports car in the world, the most Instagram’d car in the world, and now one of the most polarizing cars in the world. There are few car communities like Ford Mustang fans, a community known for their strong feelings towards the brand and expressing themselves through their car. Go take a look at any article about the Mach-E on Facebook. What kind of reactions are you seeing in the top two on every Mach-E post? The laughing, sad or angry reaction on Facebook. Fans are not happy, so much that they are starting petitions, again.

Don’t get me wrong, the Mach-E is an incredible vehicle but it was the wrong Battery Electric Vehicle (BEV) Mustang to introduce first. What do I mean by that? If Ford’s first foray with a Mustang BEV was a true two door 2+2 BEV Mustang like the Mustang Lithium concept shown at SEMA, it would have taken the world by storm. It would be a proper Mustang, truly revolutionizing the industry by providing super car level performance to the masses with zero emissions. Something Ford is known for, performance bargains that are revolutionary and there is no better brand than Mustang to debut that.

It would have fully integrated electrification into the Mustang brand and in a way that fans can appreciate. It would have then paved the way for Ford to introduce the Mustang Mach-E without the level of drama currently being experienced. This brings us to one key point, why did Ford create a “Mustang family of vehicles”? The inevitable BEV two door 2+2 Mustang will not be a spin off vehicle like the Mach-E. It will be simply called a Mustang Lithium, GT-E or whatever trim name Ford decides to give it.

If Ford was going to use the Mustang family of vehicles to release a sedan, hatchback or mid-engine car to America, this family approach would make sense. However, Ford has publicly stated that besides the Mustang (coupe), they will not produce any other cars for America as they are solely focused on SUVs and trucks. So why did Ford start a Mustang family of vehicles?

A pony will never live on a truck as that would trot all over the best selling vehicle in America, the F-150. Which already has the Ford Performance Raptor trim line for performance enthusiasts that want a truck. The future “baby Bronco” has small SUV performance covered. The Edge and Explorer already have the midsize and large performance SUV market covered with their Ford Performance ST trim line. There is no other currently viable use case for the Mustang brand without stepping on toes of Ford’s other vehicles or suddenly reversing their stance on cars in America.

Besides the Ford Performance brand, the only other Ford brand is a family of vehicles is Bronco. Bronco is known for being rugged, highly capable off-road and generally being a go anywhere and do anything kind of vehicle. Ford is not only releasing the follow up to the Bronco that everyone remembers and loves. Ford will be expanding upon the Bronco name, by releasing out a more affordable smaller Bronco. As well as a rugged off road Bronco truck to compete with the likes of the Jeep Gladiator. That is the perfect example of a successful family of vehicles that is true to the nameplate. The Mustang has evolved into a brand known for performance for the masses, which the Mach-E severely lacks.

A Lack Of Performance

You know what would have shattered the critics? Announcing that it is faster than a Mustang GT Performance Pack 2 on a drag strip and road course. Instead, it was stated it can lay down an okay 0-60 time for an electric car and only a decent 0-60 in the highest trim. Blistering fast 0-60 times are a given for electric cars. Ford should have put more time into honing the Mach-E for performance and driver’s experience. Experience is everything for today’s buyers which can make or break a vehicle’s success. Even though the first Mustang wasn’t seen as a Performance car, that is what people except of a modern Mustang.

Coming out and stating that the Mach-E is more capable than the most performance oriented (non-Shelby) Mustang would have been captivating. It genuinely would have validated that it was sufficiently capable of living up to the Mustang name. Especially in a time when Porsche and Tesla are duking it out at the Nurburgring, breaking records with their electric performance cars. Instead the Mach-E is unable to operate in sustained performance conditions and is unable to do burnouts. So owners are unable to track the vehicle or enjoy some B roads without limp mode. Granted doing burnouts is a gimmick but the world’s first electric car with burnout mode is one hell of a missed opportunity. They could have even included a feature to select the engine and exhaust soundtrack from any Mustang to captivate those who love exhaust sound. There are so many things that Ford could have done to truly make the Mach-E, look, feel and sound like a Mustang but didn’t.

The Mach-E is an incredible vehicle, but it suffers from an identity crisis by being called a Mustang. Ford really hit it off as an electric vehicle but there is some significant oversight by calling it a Mustang without true Mustang DNA. It will be interesting to see how Ford proceeds with the Mach-E. So what do I think the Mach-E should have been called? The Model E, Ford fought Tesla over use of it so why didn’t they end up using it? It would have been the perfect name to introduce the next generation of Ford vehicle and they could have made an even bigger splash than calling it a Mustang. 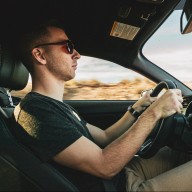 Alex is Overrun's jack of all trades, master of none. When he isn't writing an article or updating the website at 2 am, he is in the most ridiculous position shooting pictures or videos. Somehow he has never owned an automatic transmission car. Doesn't shut up about Fords if you get him started. Enjoys talking (arguing) with strangers on the internet about inaccuracies.